I just watched the finale of one of the most audacious feats of cinematic story-telling ever.  And now I’m verklempt.

Elliot Alderson, as created by Sam Esmail and brought to life by Rami Malek will remain, for me, the most intriguing character I’ve encountered on page or screen…or even in real life.

When Mr. Esmail dropped his denouement on my head last night, I felt like it was 1975 and I’d just smoked a joint before parking my ass in Introduction to 20th Century Philosophy with a brand new notebook.  Everything in our home seemed alive and burning with the endless possibilities this life can offer.  Outside the stars glittered in the night sky, singing their siren song of the “what ifs” of quantum mechanics.  I haven’t listen to that music in a long time, but the finale of Mr. Robot blew open all those doors in my brain.

Until last night I thought I’d been watching four seasons of a show about a brilliant and exquisitely damaged hacker determined to right our world’s singular wrong: greed.  But last night, oh, Mr. Esmail, you totally got me.  The breadcrumbs were there, but I ignored them.  My bad…or my good? 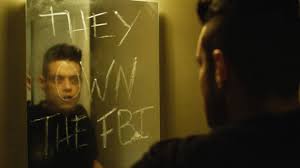 I’m sure there are plenty of fans who are sitting smugly in coffee shops saying, “Oh, I totally saw that coming.”  Hmm.  With respect, I doubt it.  We ALL thought we were watching one show – being told one story – when we were, in fact, being told another, completely different story.  I’m sure Esmail’s ending will prove to be controversial, but I thought it was perfect.

Mr. Robot has the distinction of having one hellaciously outstanding cast.  They’re all knockouts, but for me, the final season will be forever defined by the jaw-dropping performances of  Elliot Villar, B. D. Wong, and Martin Wallström – whose final scene made me weep.

So to Mr. Esmail: for the love of all that’s holy, keep telling stories!  Keep taking artistic risks.  Keep blowing minds, because those of us who actually give a shit about the state of the world need to be reminded, from time to time, that the universe is a strange and miraculous place.

And Rami Malek and Christian Slater: You both freaking ROCK. 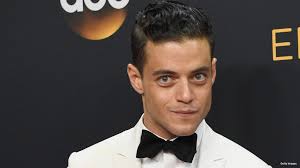