Towards the end of August, Halloween stuff started showing up in all the local grocery stores, looking wantonly ridiculous in the light of summer.  But now, as we winnow through September towards October, the black and orange wrapped confections sitting proudly in their cardboard displays nudge that part of me that will always be a kid in love with ghost stories.  Spooky Season has arrived!

To celebrate, I thought I’d share one of my darkest secrets:  I’m completely addicted to paranormal “reality” shows.  It’s true, from Ghost Adventures (referred to as the “Ghost Bro Show” in our house) to Deep South Paranormal, I’ve binged them all, gleefully. 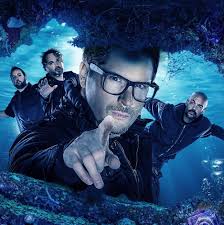 Yes, they’re silly, formulaic syllabub, but I love them just the same.  I find them in equal parts hysterically entertaining and sociologically fascinating.

Through the lenses of their film crews, we get to peek inside various homes of middle America where extremely average people absolutely DO believe in spooks…and shadow people, and demons, and even puckwudgies!

I mean, they really do believe.  And they don’t have to wait for the Halloween displays of late August to start getting in the mood.

These families, who choose to allow their lives and homes to be laid bare for unforgiving camera crews and fairly unqualified interviewers, live in a perpetual state of terror.  Shadow people are stalking their halls.  Things scratch their children in the night.  Unseen stalkers push them down their own stairs.  They feel as though they’re constantly being watched.  They hear voices, or worse they hear their own names being uttered by a guttural voice.  They hear animalistic growls.  They see full-body apparitions floating by the fridge.  Their kids are possessed.  They’re possessed.  There’s a possessed doll in the house.  There’s a possessed piano in the house.  There’s a portal to hell in the upstairs hallway.  There’s a vortex of demons in the guest bedroom closet.  They’re suffering from mysterious ailments for which 20 doctors can offer no credible explanations.  The list of their claims is as endless as the human imagination.

Ridiculous?  Yes.  But the fear, just like the struggle, is real.  And so the paranormal experts/TV stars are called in.  Most arrive in multiple SUVs with more gear than you’d take on an expedition to the Antarctic.  Countless cameras are set up while family members are interviewed.  Moms cry as they recount finding their 3 year-old talking to an invisible child named “Becky” in their room.  Mascara runs and is smeared by multiple dabs by a tissue clutched in their hands, almost always sporting freshly gelled nails.  Children are interviewed, and give up amazing stories that always sound memorized.  The moms are generally cautioned that a demon will often appear as a child, which ratchets up the waterworks and destroys what’s left of the make-up so carefully applied for the cameras.  The most oft repeated line uttered by the women?  “This house is going to kill me.”

Now, isn’t that just the perfect freaking metaphor for most of us living in America in 2019?

The moms are almost always interviewed in the kitchen, before giving the paranormal team a tour of the house’s hotspots.  The dads, however, when they agree to be interviewed (most are skeptical of their partner’s claims, go figure) are filmed in some kind of “manly” space, like the basement…or the garage.  Those who believe, or who have experienced some of the reported phenomena, are vastly more matter-of-fact in their recounting.  Although to be fair, some do get a bit teary towards the end.  Their most repeated line?  “I feel helpless.  How can I protect my family?”

Bam!  Another succinctly stated fear that we all share, regardless of whether we believe in ghosts or not.

What follows is always the same.  The family and their pets are escorted to a local motel and the team dives into the house – at night, of course, because ghosts, demons, and puckwudgies have other shit to do during the day – armed with EMF detectors, Spirit Boxes, EVP recording devices, full-spectrum cameras, REM-pods, and even some dollar store toys for reportedly playful spirits.

They crawl around the house all night long, sometimes shouting provoking stuff like, “You think you’re tough, terrorizing women and children?” and often jumping out of their skins when the house settles in response.  Their findings are, shall we say, controversial, to say the least…although to be fair, every once in a blue moon, some truly strange and disturbing thing is caught on camera that would make even the most hardcore skeptic say: “WTF was that?”

Sometimes, members of the clergy are summoned to bless the house and/or oust demons.  My personal favorite is Bishop Bryan Ouelette, whose business card should read: “Bad Ass Exorcist.”  He appears from time to time on Ghost Adventures to do battle with his immortal foe.  I seriously like this guy, and should one of our jack russells start talking to me about a dimensional vortex in the master bath, I promise you that Bishop Bryan will be the very first call I make (after I check the THC content of my CBD oil.)

The evidence gathered by the team – usually consisting of a few questionable EVPs, and some shots of orbs – is presented to the family the next day.  There are more tears, and then the paranormal stars pack it up and head back home to edit the show.  The families, for whom their fears are extremely real, are left in their haunted houses and their haunted lives.  Yeah, they signed off to appear on these shows, so any fallout from doing so is completely on them, but still…

Humans feel imperiled and helpless, a potential savior appears – briefly – filling them with hope, and then disappears down the road, having captured pieces of their souls for eventual display as entertainment content for people like me to gobble-up.  It’s a perfect Ouroboros of end-times pop culture.

Standing out a bit from the crowd, is The Dead Files, which, like Ghost Adventures, airs on the Travel Channel. 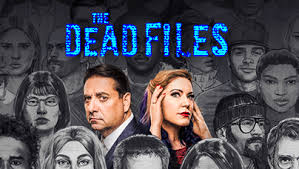 The show’s formula is similar to the others, but with a twist: the house is explored at night by psychic, Amy Allan, who eschews gear like EMF detectors in favor of her own ability to communicate with the dead.  Amy is great.  She swears like a longshoreman and has probably been bleeped more than any other Travel Channel regular.  Is she acting?  Is she for real?  Don’t know, don’t care.  She’s great.  She can make a nighttime stroll through a mid-century farm house in Illinois into something that Dante wishes he’d remembered to put in The Inferno.

Her partner, retired NYC homicide detective and former Marine, Steve DiSchiavi does the  interviewing during the day.  Women in their kitchens, men in their manly spaces.  The tears flow, but DiSchiavi runs his investigation like a pro.  For example, if the family complains of lights going on and off, he calls in an electrical inspector to go over the entire house.  He spends most of his time researching the house’s history and the area surrounding it, working with local police, historians and genealogists.  Sometimes he makes an amazing find, like the house was used as a morgue during the Civil War, or there was a horrible triple homicide on the property in the ’50’s.  He always gathers photos, death records, and newspaper articles to support his investigation.

Meanwhile, Amy sits down with a local sketch artist, who creates, from her vivid descriptions a scene or two of what she saw in the house.

Everyone then gathers in the house at night by candlelight and Amy describes what she experienced while Steve listens and often validates Amy’s claims with the evidence he’s gathered about the house’s history.  There are always a LOT of tears when the sketches are presented, but then Amy actually tells the harried house owners what they need to do to take care of business.  She has and will recommend anything and everything from a Voodoo priest to a male shaman between 20 and 30 years-old with a mild temperament.  If things are totally fucked up, she’ll sometimes offer to send in her own team of spiritual house cleaners.  It’s all show business, but Amy and Steve are Bosses.

So, if you’re feeling the pull of the Spooky Season, but can’t make yourself watch another Friday the 13th marathon, I highly recommend binging one of these shows.  When you get past the formula and the on-camera personalities, what you’re left staring at is a true American Gothic landscape as bleak and terrifying as anything from T.S. Eliot’s eternally haunting The Waste Land.  Listening to people who look and sound exactly like you and your friends discuss summoning shadow demons, being sexually assaulted by a non-existent entity, and possession as if it’s happening in every home, is truly frightening…and intriguing as hell.

(I never said that I don’t believe in ghosts.)